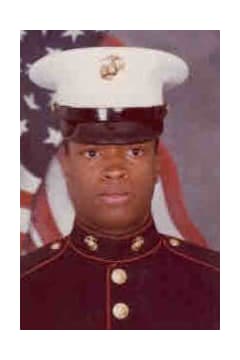 The Jordan family is sad to announce the passing of a loved one.

Retired Staff Sgt Samuel David Jordan, Jr. was born on August 21, 1966 to the parentage of the late Samuel David Jordan, Sr. and Rozalin Daniel Jordan in Macon, Georgia. He received his
education from the Bibb County Public Schools and graduated from Northeast Comprehensive High School in 1984. At an early age, David joined and was baptized at New Pleasant Grove Missionary Baptist Church where he regularly attended Sunday School and sang in the youth choir. David had a propensity for the military early in life and participated in the Northeast High
School Junior Army ROTC for 4 years. After graduating from high school, David enlisted in the United States Marine Corps. He successfully completed his basic training in Paris Island, South
Carolina. During the 20 exemplary years that David served in the Marine Corps, he served in San Diego, California, TwentyNine Palms, California, Camp Lejeune, North Carolina, Okinawa,
Japan, New Orleans, Louisiana, Tokyo, Japan, Albany, Georgia and Athens, Georgia where he retired and worked for the Clarke County Sheriff’s Department and The Classic Center.
David was a hard worker but in his spare time he enjoyed motorcycles and sports, especially the Georgia Tech Yellow Jackets and the Dallas Cowboys. His passing on Sunday morning, May 26, 20019 is a deep personal bereavement to his many
friends and relatives. In their hearts, there will live admiration, affection and respect for him. David leaves to hold dear his memories his Wife, Lisa Fields Jordan; Mother, Rozalin Jordan;
Sons, Justin Terrell Jordan and Dallas Ephraim Jordan-King; Step Children, Brandon Jackson, Daysha Edwards, Timilyn Edwards and Marcus Devine; two sisters, Yvette (Wayne) Crittle and
Alicia Jordan; Brother, Kendall Jordan; a host of caring nephews, uncles, aunts, cousins and friends.

I worked with SSgt Jordan for a few months in Athens before he retired from the Corps. He was a great Marine and an even better man. My condolences to his family and friends. Rest in peace brother.
- Apaul Blanco