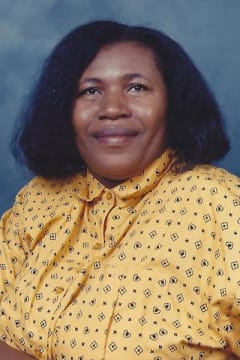 The Warren Family is sad to announce the passing of a loved one.

Ora Jean was educated in the Worth County School System. She was also a member of Penecostal Full Gospel Crusade. She was united in holy matrimony to Mr. Johnny Lee Warren, Sr. on May 8, 1978.

Mrs. Warren was employed by tift healthcare for many years until her health began to fail.

Change is apart of life we come and we go. We all have a spot on a certain day when ever it's time. Grandma "Titty" is what we called her most. She was a very loving and caring person . Always meant well and did great by al of us. I will forever cherish the moments I shared with her. Grandma always had sound and GODly advise. Even to this day, yes this day she plan her home coming the way she wanted. What a Blessing to be able. But know this my family, it's all a part of CHANGE! Love you all and RIP, Grandma "Titty". I can literally taste them home cooked biscuits she she to cook for us all...
- Daryl D. Warren
I'll never forget how we traveled home during the summer in my younger days. Grandma made some of the best biscuit and fried chicken! We always ate good. Grandma kept to herself and didn't bother nobody . Thank you for always being there for me even if it was just to listen. Regardless, you always gave good advice. You will forever be missed but never forgotten. I love you. R.I.P
- Buffy Walker
We are so sorry for the loss of your mother. We will always be here if you need us. Our prayer is that God give you the strength and comfort you need to help you during this difficult time. We love you! Your Tyson family. Sheilan, Annette, Johnnie Mae, Diane T. , Carla, Zenobia
- sheilan mcgill
My dear sister, I am sorry I did not get a chance to say good bye. We will see each other in heaven, until then you have earned your wings My Angel. Love you. Annie r Oliver
- Annie oliver
Never thought I'd lose you, But here I am, Standing alone, Without you by my side, We're sisters for life, We promised, But now you're gone, I don't know what to do, Without you, I'm going crazy, I'm trying to hold on, To keep strong, But it just doesn't feel right, I'm waiting here, My arms wide open, Tears running down my face, Ready for your return, Even if it takes forever, My sister...
- Sandra Malone