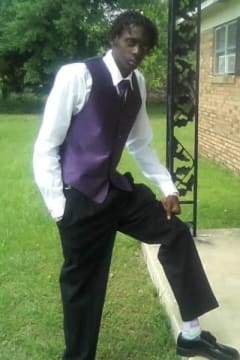 The Bell Family is sad to announce the passing of a loved one.

He was one of a kind and definitely had his own sense of style. He loved to wear crazy socks no matter where he went or what the occasion. He even inspired several family members and friends to “step their sock game up”. He loved all of his family very much, and was always doing kind things and caring for loved ones. He continually gave encouraging words to anyone he met and whenever Michael set his mind to accomplish something, he did it. He was very determined to make it and do things his own way.

Michael attended public schools in Donalsonville, Ga and was a 2012 graduate of Seminole County Middle/High School. During his high school career, Michael ran cross country and was selected as the team captain of the cross country team by his coach. His natural ability to be a leader in everything he did guided his team to State meets all four years. Michael also played basketball, and his tall slender body allowed him to be very agile, making him a force to be reckoned with. As he grew older and more mature, Michael developed a passion outside of athletics, music. Not long after, he began collaborating with his brothers, Douglas Bell, Jr. and Brandon Bell. Soon after, the brothers invited friends to join them, and they wrote several songs and even made music videos. This ignited fire pushed Michael to pursue the study of music at the college level so that he could hone his skills and perfect his craft. He wrote his own lyrics. Michael was loved by many and was able to impact so many lives through his warm smile, charm, and free-spirit.

Michael is preceded in death by his paternal Grandfather and a host of Aunts and Uncles. He departed this earthly life and entered his heavenly home on July 23, 2020.

I watched you and your brothers grow up. Michael your spirit was bright and drew people to you. I am and will always be proud of you. I love you lil cousin.
- Eddie Crawford
I've never met Michael but reading his obituary I can tell he was a very special man with a very special family. I especially loved the socks comment 🙂 Thinking of Michael and family. - Bailey at Medical Solutions
- Bailey Hoadley
He was such a wonderful soul who always had me laughing, when I got the news I was heartbroken such an amazing person gone so soon. My Condolences to his family.
- Cassandra