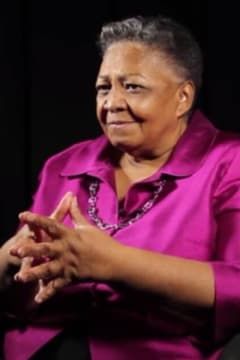 The Jones Family is sad to announce the passing of a loved one.

Mamie Nell (Mimi) Ford Jones was born on May 4, 1947 in Oakfield, Georgia and was the
thirteenth of fourteen children born to the Late Terrell Ford, Jr. and Lettie Mae Young Ford. She was educated in the Worth and Dougherty County Public School Systems. She was one of six African American students to desegregate Albany Senior High School in the fall of 1964. She graduated with the honor of ranking 5th in a class of more than 500 students in the spring of 1965.

Mamie was a champion for freedom, equal rights, justice, for the voiceless, and marginalized. She worked with SNCC and SCLC in Albany, Georgia. As a teenager, in 1963 Mamie attended “The March on Washington” to support the efforts of Dr. Martin Luther King, Jr. She worked in voter's registration, the freedom school, mass meetings, demonstrations, and was arrested and went to jail numerous times. The 1964 demonstrations in St. Augustine , Fl. propelled Mamie into the global arena in the fight for civil rights. She was at the forefront of the demonstrators who entered the segregated swimming pool at the Monson Motel Lodge in St. Augustine , Florida. As she waded in the pool with other demonstrators , the motel manager poured acid into the pool. The photo of Mamie crying out as her eyes burned was sent around the world. This was a major stimulus to the passage of the Civil Rights Bill in Washington the following week. Mamie was interviewed by NBC 4 days before passing for a TV special that would acknowledge her role as a civil rights activist.

Mamie was united in holy matrimony to John Cawley Jones on August 16, 1980. This union was blessed with a son, Gervase Alexander Jones. Their home is Boston, Massachusetts.

Mamie went to Nason College in Maine on academic scholarship. She later matriculated to the University of Massachusets, Boston for completion of her BS degree. Boston was the right fit for her intellect, academic acumen, civic activism and cultural appetite. Mamie was always reading and gathering knowledge. She was an avid traveller, fluent in French, Spanish, and English
( reading, speaking and writing). Mamie spoke out against injustice, and worked tirelessly in the vineyard until she closed her eyes the morning of July 26.