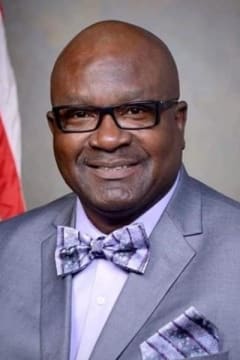 The Johnson Family is sad to announce the passing of a loved one.

In Sylvester, GA on August 20, 1958, Lucious and Torlie Mae Johnson gave birth to a baby boy, Larry.
He was educated in the Worth County School System. Larry graduated a Worth County Ram as apart of the Class of 1978. He was also a member of St. Paul Ministries. Larry Married his Sweetheart, and life partner, Tangela on April 24, 2000
Larry was proud of who he was, and where he came from. So much so, that he rooted for all things Georgia. Larry was an Atlanta Falcons superfan and a Georgia Bulldogs supporter through and through.
Larry enjoyed dancing, cooking, and making the community he lived in a better place. You would often find him cooking and hosting giveaways with Men United Club, Inc. If you looked up the definition for a servant leader, there should be a picture of Larry close by. He took on leadership roles on numerous civic boards. Larry joined the Sylvester City Council in January of 1994 where he served Ward 4 and the City of Sylvester for over 28 years.
He was preceded in death by his parents; two brothers, JC Johnson and Luscious Johnson, Jr.; and two sisters, Irma Jean Johnson, and Ethel Johnson.
He leaves to cherish his memories, his loving wife of 20 years, Tangela Renee Johnson of Sylvester, GA; six daughters, Tiffany Johnson of Sylvester, GA, Brittney Smith of Sylvester, GA, Porsha Hillmon of Tifton, GA, Jasmin (Recordo) Jackson of Sylvester, GA, Shanice Johnson, and Simone Johnson; two sons, Terron (Alexjandra) Hamilton of Moultrie, GA, Dewayne (Beth) Clark of Waynesville, MO; four sisters, Sujette (Michael) Johnson of Sylvester, GA, Phyllis Johnson of Sylvester, GA, Runell Anthony of Snellville, GA, Daisy McGee of Carson, CA; three brothers, Clinton Johnson of Albany, GA, Jay Lee Johnson of Sylvester, GA, Terry Lee (Sherry) Johnson of Sylvester, GA; twenty-two grandkids; two great-grands; one mother-in-law, Mardean Sparrow; One father-in-law, Warren Cook, Jr.; and two brothers– in–law, Condidio Cook, and Otis Daniels; and a host of nieces, nephews, other relatives, and friends.

Praying for strength and comfort to the family. My thoughts and prayers are with you all. He will truly be missed and loved. -Kierria Slaughter
- Kierria

So sorry for your loss. I worked with Larry for many years and did his payolls. He was always a caring and concern person for his family, coworkers, community & friends. He will be missed by many. May God give you strength, comfort and peace during this difficult time in your lives. Evangelist Margaret Brown, Travis Butler & family.
- Margaret Brown

So sorry for your loss. Prayers for comfort to Renee, Brittney, and family. Tommy & Elaine Bozeman
- Tommy Bozeman

Praying for peace and comfort during this most difficult time. Larry had a servants heart and he served his family and his community well. He will be missed by all those who knew him. 🙏🏻❤️Fly high for your work on earth is done.
- Debbie Bridges

I offer words of encouragement and sympathy to the family. My prayers and thoughts are with you Brittany and Alyana. Be strong and know that he is forever with you. Sharlett Carroll, Worth Head Start
- Sharlett Carroll

So sorry for your loss, I will keep you in my thoughts and prayers. I was worked with Larry, with DOT. Larry was always so nice and friendly with everyone, he will be missed.
- Linda Edmondson
I was GDOT co-workers with Larry for many years--Enjoyed and was impressed in each exchange with Larry--He was always respectful and eager to learn new skills--He was always very dependable and available, regardless of the time of day or day of the week--He had many talents and used them well in serving others, even in retirement as a City Commissioner--He enjoyed helping others so much--May Larry's family be comforted by the love of Jesus at this very difficult time---Buck Hartley--GDOT--Tifton (retired)
- Buck Hartley

So sorry for your lost he is a angel watching over us. He will deeply miss. He was a good guy.
- Rita Toledo

Mr Larry Johnson you have fight a good fight the battle is over now.Take your rest. Your ex cro worker Patricia Johnson Tifton ga.
- patricia Johnson

I LOVE MY DADDY AND ALWAYS WILL FOREVER ❤️
- TIFFANY JOHNSON
The citizens of District 4 will surely miss him. He always made sure to keep us informed on what was going on. And he was very involved in many things concerning our city. I am praying for Renee and family.
- Fred Dowell

- Betty Lister
I write for the paper and was always calling Larry on Sunday as I was finishing up a story and needed to know one more fact. He was always polite, took his time to explain things fully and never talked down to me. I'll always remember that. And, if I had to ask a sensitive question, he'd tell me if he knew. Sylvester and Men United will miss him.
- John McPhaul

Rest in Peace Larry, you will be missed by many. Hope Renee and children can find comfort in each other at these difficult times
- Kathy Thompson