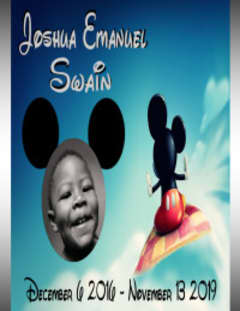 The Swain family long with Mickey Mouse and friends are sad to announce the passing of a loved one.

Joshua Emanuel Swain was born on December 6, 2016 to Chassity Swain and Joshua Lewis in Sylvester, Georgia.

Joshua liked to run, and like most little boys he liked to throw rocks. He loved to steal kisses from his mother. At an early age he sought to be a super hero to his little brother as well as an inspiration to look up to.

Joshua had a smile that lit up the room and warmed the hearts of anyone that witnessed him smile. Silly and courageous are traits that describe Joshua’s little heart. In such a short time he made many joyous memories that are captured in his mother’s heart.

Joshua was as kind and noble as a little prince, and too soon from this world he departed. On November 13, 2019 his brave heart was put at ease. He laid down to rest and was greeted with a loving smile by his dear grandmother, this made the transition a little sweeter for Joshua.

Joshua was preceded in death by his beloved grandmother: Rena Hill.

Words cannot describe how you feel. Put your trust in God, and you will understand it better by and by. This little angel is back with his father
- Bobbie Williams