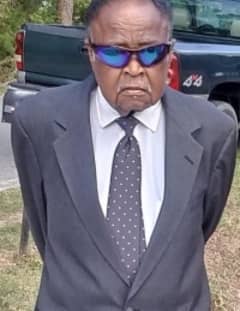 The King Family is sad to announce the death of a loved one.

Jimmy Lee King, affectionately known as Jim, was born on August 12, 1949, to the late John Thomas, Sr and Myrtice Toles King.
He received his formal education in the Worth County school system and graduated from J.W. Holley High in 1968 and furthered his education at Georgia State University in Atlanta, GA with a focus in Journalism.
Upon graduating from high school, Jimmy served four years in the United States Air Force and was a Vietnam Veteran. With an upbringing in a God fearing home, he often attended Pleasant Grove Baptist Church of Shingler, GA.
In addition to his parents, he was preceded in death by a brother, Earnest King and Benjamin King, Sr, While living in Atlanta, Jimmy worked for the City of Atlanta. After his tenure in Atlanta, he returned home and became the first black meter reader for the City of Sylvester where he worked for many years. On Tuesday, April 30, 2019, God looked out on the battlefield and saw a solider that had labored hard. Being a merciful God, he made a final call so that his soul may rest in peace.
The legacy of his season will forever be cherished in the hearts of his brothers; John Thomas King, Jr. (Joyce), Milton King; a sister-in-law Annie Dean King; and a very special friend, who was like a brother, Victor (Ellouise) Evans. A host of nieces, nephews, and friends.

Honor the life of Jimmy King

Please share a condolence, photo or memory of Jimmy . We welcome all condolences that are positive and uplifting that will help family and friends heal.